All my apps run from a web server, using special technology.

The server actually is a membership site. It has one or more admins, and it also has users, guests and any other kind of user roles that the app needs.

Apps users become members by entering their data within the app itself. As long as they do not uninstall the app, they will have access.

“Users” of the web server are actually the admins for the “mobile users”.

To write the database in the server, we first analyse the screens in the app, then stop developing on the mobile and design web server functionality, then write PHP code to create JSON for the apps, and only then the apps can access the data on the server.

Here is what the server dashboard may look like: 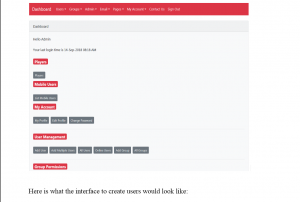 Server side dashboard for admins and user alike

Here is what the interface to create users would look like: 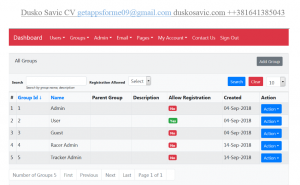 How to create users on the server

For the sake of clarity, I discuss here another app that would track orders from cafes and beans shops. There would be this apps server through which a company would manage orders and their fulfillment.

The apps server has the following functions from the get go:

— users can register from the site itself (if you want to provide that kind of functionality)
— there are three different user roles:
— admin, the boss around the site and mobile apps,
— users of the site, which usually act as admins for the mobile users
— guests of the apps site, if you want to have people look around the site for some reason.

Mobile users would register and login through their devices and stay logged in unless they log out on purpose. Mobile apps talk to the server through PHP function calls and the server returns values as JSON, which the apps interpret and show different screens or messages as the result.

Note that the process is the same for tracking cafe orders and showing news for the NFL players.

Upload Images From Mobile Device to the Server

On the server, a typical user could enter, edit, store in the database entries about the shops:

— personal data for the shop manager,
— address / physical location of the shop
— send email to admin when a significant event in the system occurs

It is also possible to track orders from the shops and there are two ways to do it:

— the managers who order also have your app, with their predefined roles, and can order directly through the app, or

— they print or write orders on paper, take a photo through the app, send the image to back end personnel of the web app, who then approve.

Have Your Own Apps Server?

Every mobile app should have its server to store the data about users, to retrieve these data to the apps, to have more control on behalf of the apps owner and so on. Let me know if you wanted to have your own apps server!