How To Install Facebook App On an Adroid Emulator

I want to install Facebook app on Android emulator / simulator to be able to test new plugins that I write. Searching for phrase “install facebook app android emulator” I decided to listen to this source of knowledge:

After clicking on this link, I agreed to become a Facebook developer. Then I gave a name to the app that I will be making, it gave a Facebook app ID, and then I downloaded the Facebook SDK. The file was called facebook-android-sdk-3.21.1,

Install Facebook application into a running android emulator, from a Terminal (CMD) screen

then I also downloaded the version for the emulator. It is called Facebook-11.zip and will actually contain only one file, Facebook-11.apk. And voila!, I have Facebook app on my emulator! 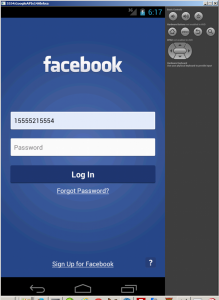