The most important link to learn how to share links from your Android apps to Facebook is this.

Here is the Getting Started Guide for Facebook. Since I had previously already had created a Facebook app, imaginatively called “Test On Android”, I just had to download the SDK. Unzip, and take it from D:\Downloads\facebook-android-sdk-3.21.1(1) on my local disk. From Eclipse, File Import, but without copying the SDK physically into the workspace, as per Facebook instructions.

Not much luck, Facebook files came setup to Android 9, which Google does not seem to offer any more. However, FacebookSDK was installed safely, asking for version 10 or 2.3.3, which is totally OK. Now I go to my current app, called ShareMenuDemo and import the jar file for Facebook: 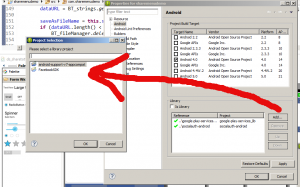 Click Apply to confirm and that’s it, no red marks in Eclipse, everything normal. Now put the app identifier into the strings.xml and androidManifest.xml files, like this:

The placement of Facebook app identifier in the Android Manifest file